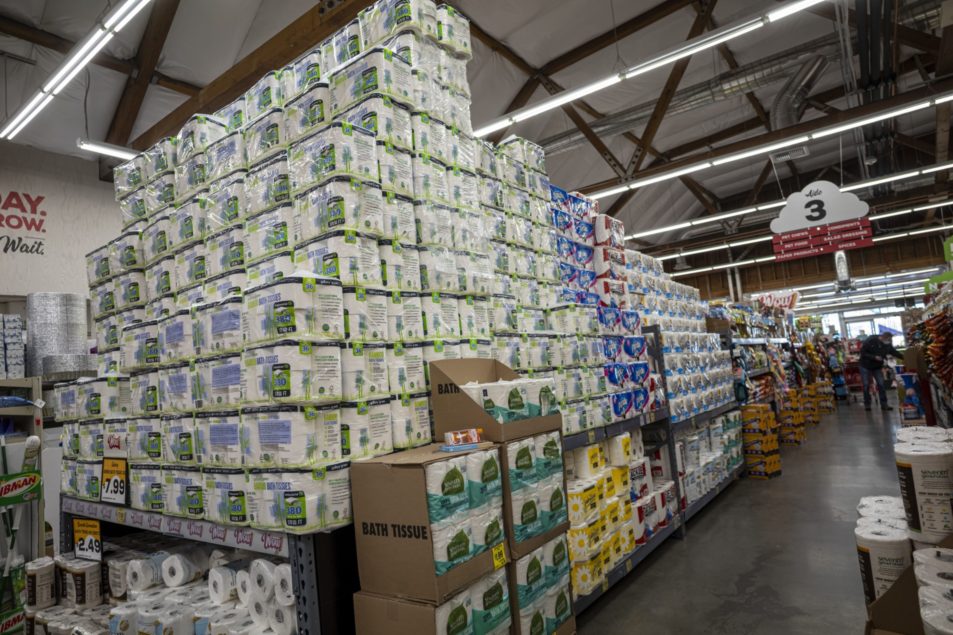 Companies from Procter & Gamble Co. to Walmart Inc. are lagging in efforts to mitigate the environmental impact from the paper products they make and sell, according to a new report from an advocacy group.

Environment America assessed the progress of six companies on their use of virgin fibers and indirect greenhouse-gas emissions. The group also looked at whether they obtained consent from Indigenous communities whose land is used for pulp supplies. It found most of the firms lacking, either because they hadn’t made explicit promises to address those issues or because their plans didn’t go far enough.

“The industry has made progress, but it still has a long way to go,” report author Sammy Herdman said in an email. “Companies should prioritize providing consumers with sustainable products that don’t harm our forests.”

The group assigned grades from A through F based on its criteria. Walmart was given an F because it doesn’t disclose how many products are made with 100% recycled fiber or other non-virgin wood, according to the report. In addition, its goal to reduce indirect greenhouse-gas emissions isn’t as ambitious as what Environment America recommends, and it has “no public policy relating to the free prior and informed consent of Indigenous communities.”

The other three companies given a failing grade for similar reasons were Costco Wholesale Corp., Amazon.com Inc. and privately held Georgia-Pacific, which makes toilet-paper brand Quilted Northern.
P&G, which received a D, released a bamboo toilet paper product this year, which the advocacy group said is a “step in the right direction.” But it said the Charmin manufacturer’s emissions could be improved.
In November, another environmental group called on U.S. regulators to review P&G’s claims to investors about its wood-pulp sourcing policies. The consumer-goods giant issued a policy update earlier this year pledging to preserve forests “for generations to come.”

Kimberly-Clark Corp. got the best grade — a C — because it has already committed to cutting its use of “natural forest fibers” by 50% by 2025. However, the Cottonelle maker doesn’t have an explicit policy on “informed consent” with Indigenous communities, Environment America said, adding that the company could also have a more ambitious emissions-reduction target.

In a response to questions about the report, Georgia-Pacific, which Koch Industries Inc. owns, said it follows guidelines on forest protection and sustainable practices. The company said its suppliers are private companies that local governments approve — and Indigenous groups help to determine how these suppliers use the land. Georgia-Pacific is also working to reduce greenhouse gases by improving energy efficiency and using new technology, the company said in an email.

Kimberly-Clark said it’s progressing toward its goal of sourcing 90% of its tissue fiber from “environmentally preferred sources” by 2025, with 87% coming from such sources in 2021. The company said it reduced its use of forest fibers by 34% in 2021 from its 2011 baseline and is “committed to unlocking further reductions through innovative new materials and technological solutions.” An increasing percentage of the virgin wood fiber used by Kimberly-Clark is certified by the Forest Stewardship Council. This nonprofit group promotes responsible forestry, the company said in an email. The FSC “applies the most rigorous criteria for the conservation of biodiversity and the protection of the rights of Indigenous communities,” Kimberly-Clark said.

P&G said it has “comprehensive policies, practices and investments” to “ensure no one has to choose between the products they use today and what they hope to preserve for tomorrow.” In an emailed statement, P&G said it has strengthened its supplier policies and audits in the areas of human rights and forest protection.

The company scored A- for wood pulp in the CDP Forest Survey.

Walmart referred to its Project Gigaton climate plan, which aims to “engage suppliers, NGOs and other stakeholders in climate action to reduce or avoid one billion metric tons (a gigaton) of greenhouse gas emissions in the global value chain by 2030.”