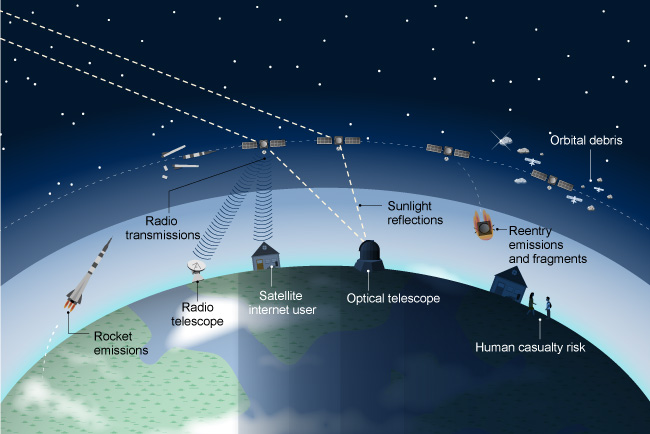 According to a report released Wednesday by the Government Accountability Office, the Federal Communications Commission has not properly documented why it should be allowed to skirt environmental review laws when launching large constellations of satellites into space.

Now GAO is recommending FCC reevaluate the environmental impacts of sending satellites into space and verify whether those launches qualify as categorical exemptions or have already been determined insignificant to the environment under the National Environmental Policy Act.

GAO is also recommending FCC publish all of its findings publicly.

“FCC officials said that proposals for large quantities of satellites are excluded, but FCC hasn’t assessed whether its exclusions are still appropriate,” it said.

FCC established its categorical exclusions under NEPA in 1986. GAO argues that large satellite constellations did not exist then, so its consideration of the environmental impacts of the technology is now moot.

“FCC officials told us that they are always considering whether the categorical exclusion is current and appropriate and that they have a process in place for interested parties to raise concerns when applications are submitted,” the report said. “However, FCC officials could not provide documentation demonstrating that they specifically looked at the categorical exclusion as it applies to licensing large constellation of satellites.”

GAO provided three recommendations to FCC to resolve the problems.

The first is to review whether licensing large constellations of satellites normally does not have significant effects on the human environment and document FCC’s decision.

The second is to establish a time frame and process for a periodic review of its categorical exclusion under NEPA and publish both on the FCC website.

The third is to identify the factors that the FCC will consider in determining whether an extraordinary circumstance that overrules a NEPA exemption is present when reviewing licenses for large constellations of satellites and making the results available to the public.

“The [FCC] is committed to ensuring that its actions, including satellite licensing activities, comply with the requirements of [NEPA],” the agency said in a letter after reviewing the report.