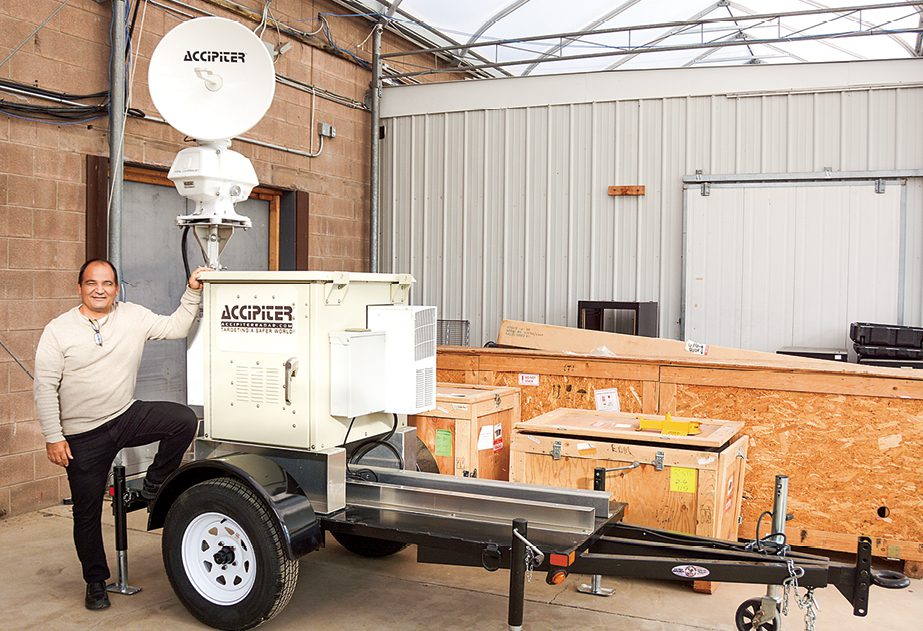 Figuratively and literally, Dr. Tim Nohara has some big sales on his radar.

Accipiter, which is a large North American industry player in the development and deployment of avian radar systems for bird detection and avoidance at civil and military airports, also announced a contract with the Hellenic Air Force to supply 3D avian radar systems at five of their bases in Greece.

“The use of Accipiter’s proven radar solutions will provide detect-and-alert and detect-and-avoid information needed to commercialize at scale,” said Glen Lynch, CEO of Volatus Aerospace, in a press release. “Teaming with Accipiter enables us to introduce innovative green solutions for our customers in our journey toward a carbon neutral future.”

In his own media statement, Tim Nohara said he was “excited” by the opportunities to come. “The safe deployment of drones leveraging our well-established radar surveillance solutions will make a real difference both for industrial customers and our environment alike,” he said.

Every 1,000 miles of pipeline inspected using a drone, rather than a helicopter or light airplane, reduces the carbon emissions being released into the atmosphere by as much as 2400 pounds, according to a source quoted by Volatus. Given the millions of miles of pipeline in North America that require regular, ongoing inspection by air to comply with safety regulations, the environmental impact of battery-powered drone use may be hugely significant.

Volatus Aerospace, headquartered just north of Barrie, is a provider of integrated drone solutions in North America and around the globe. It serves civil, public, and defense markets.

Accipiter has a record of developing high-performance radar and sensor intelligence networks, engineered to monitor the environment for such targets as ships, low flying aircraft, vehicles, and birds, as well as natural occurrences like weather and ocean waves, and snow and ice. Homeland security, aviation safety, and environmental protection are all enhanced by Accipiter’s technologies, work on which is conducted at its offices in Fonthill and Orchard Park, New York.

Accipiter avian radar systems will be used with their Greek regional partner to monitor bird activity in and around aircraft approach and arrival flight corridors, providing intelligence for airport staff to assess potential risks. The deployed systems will include steerable acoustic hailing devices, which will be used to target and harass flocks of birds with a variety of audible sounds.

Nohara met with the Voice to discuss his company’s success in attracting domestic and foreign customers.

“It’s all about doing a better job, more safely and cost-effectively, on a path of decarbonization,” said Nohara. “Many people have probably witnessed helicopters inspecting hydro lines and other infrastructure. Pilots operate under VFR, or visual flight rules, based on line-of-sight. Industry regulators have specified that unmanned drones require a remote pilot in command and that the pilot has to keep that drone in visual line-of-sight, which isn’t very far. So if you are using a remote pilot to fly drones for inspection purposes, you’ve got to keep moving with the drone, which is very limiting.”

The workaround is to contact civil aviation authorities to receive a special flight operating certificate that allows drones to fly beyond visual line-of-sight.

“That’s where we come in, with our radar and sensor surveillance technology,” said Nohara. “We can detect the threats that civil aviation authorities are concerned about, like small crop duster helicopters, which are uncooperative because they’re not broadcasting their whereabouts like passenger aircraft are required to do. So the technology allows us to see and avoid those small aircraft flying at low altitudes when doing drone inspections. The remote pilot in command of the drone is sitting in an operation centre somewhere, requiring a visual understanding of the intruder aircraft approaching the drone's airspace so that the drone can be brought down to safe position in time to avoid any impact.”

Nohara said that Accipiter’s role is to deploy the right surveillance network cost-effectively and deliver the decision support to give the remote pilot effective eyes on any operations in the vicinity of the drone.

The creation of working solutions transcends science, he said.

“It’s not just technology. It’s a people process. It’s regulatory approvals and it’s testing. This is the area in which we’re very active. Customers want to do their work cost-effectively and with a reduced carbon footprint. And the way to do that is to employ beyond visual line-of-sight.”

Nohara lpraised the Niagara Central Dorothy Rungeling Airport (NCDRA) in south Pelham, a facility he referred to as “a gem.”

“It’s one of the few places in the country that has this kind of unique airspace that supports an ecosystem of technology, artificial intelligence, and advanced aviation safety. It’s right here in our backyard. We have an aerodrome with Class G airspace that lets us test-drive drones, assess their surveillance capabilities, and demonstrate the safety equation. I think it has huge future potential for this region.”

“We can use statistical patterns of bird activity effectively. It’s no different to the Ontario Ministry of Transportation collecting traffic data on the QEW to predict peak periods of congestion. Bird flocks have patterns, like vehicles and their drivers on the way to work. Birds fly from their nesting places to search for food and then return later in the day. Once we understand the flight paths, we can deliver high-value technology for surveillance and intervention.”

“We talk about innovation all the time, but most people don’t fully appreciate what it involves,” he said. “It’s face-to-face discussions, whiteboarding, brainstorming, running down the hall when you hit an impasse to have a conversation with somebody who might be able to contribute to a resolution. It’s so critical. All innovation businesses have taken a huge productivity hit during the pandemic, with staff working from home, but hopefully, we’re seeing a comeback now.”