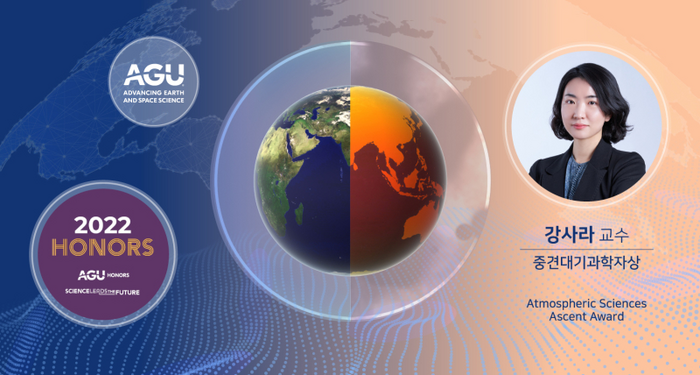 Sarah Kang, Professor in the Department of Urban and Environmental Engineering at UNIST was announced as the recipient of the 2022 Atmospheric Sciences Ascent Award.

The Atmospheric Sciences Ascent Award is presented annually and recognizes excellence in research and leadership in the atmospheric and climate sciences from honorees between eight and 20 years of receiving their Ph.D. Established in 2012, this award is given to four exceptional, mid-career scientists who are affiliated with American Geophysical Union’s (AGU) Atmospheric Sciences section or sub-section.

The award presentation ceremony took place at the Atmospheric Sciences section dinner during the AGU Fall Meeting, which took place in Chicago, United States from December 12 to 16, 2022.

In this award, Professor Kang was credited for changing the existing views of extratropics-to-tropics teleconnection. Until the early 2000s, climate changes in both extratropical and tropical regions were studied separately. However, Professor Kang presented a new perspective in the field of climate dynamics, as she identified the teleconnection patterns between extratropical and tropical regions.

Furthermore, in a recent study, model experimental data were constructed through international cooperation to better understand the role of ocean circulation on teleconnection. This has been evaluated as an achievement that pioneered a new field of climate dynamics.

Meanwhile, Professor Sarah Kang received the B.S. degree in Atmospheric Sciences from Seoul National University, Korea, and the Ph.D. degree in Atmospheric and Oceanic Sciences from Princeton University, United States. She joined the Department of Urban and Environmental Engineering at UNIST in 2011. Prior to joining UNIST, Professor Kang worked as a postdoctoral fellow at Columbia University, United States. In 2021, she was named to serve as a co-chair of the Climate Dynamics Panel (CDP), which organizes climate dynamics research around the world, in an organization under the World Climate Research Programme (WCRP).

Disclaimer: AAAS and EurekAlert! are not responsible for the accuracy of news releases posted to EurekAlert! by contributing institutions or for the use of any information through the EurekAlert system.