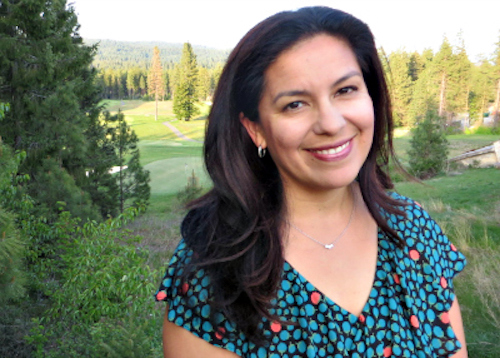 Thanks to a $180,000 grant from the Public Interest Technology University Network (PIT-UN), UC Santa Cruz will be able to further its focus on “using tech for social good” in collaboration with two other University of California institutions.

For a second time, UC Santa Cruz has secured grant funding from The Public Interest Technology University Network (PIT-UN). Leaders of PIT-UN —  a partnership assembled by New America and the Ford and Hewlett foundations that supports 48 colleges countrywide in their pursuit to be inclusive in the wake of new technological advancements — announced a total of $2.3 million in funding at its annual gathering in New York City on Friday.

Sylvanna Falcón, associate professor of Latin American and Latino Studies and director of the Dolores Huerta Research Center for the Americas, is the successful recipient of the award and will work with a team of researchers — Alexa Koenig and Stephanie Croft of UC Berkeley’s Human Rights Center and Jessica Peake of the Promise Institute for Human Rights at UCLA School of Law — for 16 months to evaluate and instruct around environmental crimes, which disproportionately affect marginalized communities in Latin America.

Falcón and her UC colleagues will be advancing their existing work with students that builds their investigative skill sets while supporting Latin American human rights organizations that would benefit from the added research support to complete comprehensive open-source research. The UC faculty and students gather information from afar that helps their southern counterparts prepare to collect facts online.

“Environmental crimes are happening in precarious and dangerous conditions, and our research labs are often working at a safe distance,” Falcón said. “We are not experiencing surveillance in the same way that defenders are on the ground.”

This is an expansion of the work of The UC Network for Human Rights and Digital Fact Finding, which includes a group of more than 100 student and community partner technologists that are uniquely diverse. The UC labs are majority women of color who identify as bilingual or multilingual, immigrant or first-generation. Approximately thirty of these researchers attend UC Santa Cruz.

“It’s been an unexpected career highlight to be able to work with such a richly diverse student community and to be able to empower them with these digital literacy skills,” Falcón added. “As you can imagine, the online disinformation landscape has become so toxic and extensive that we are not short of work that we have to do.”

Falcón’s fellow scholar Peake hopes her work toward fighting for fundamental human rights will translate into real-world accountability for those responsible for environmental harms and reparations for those most affected.

“Environmental harms are one of the biggest challenges facing humanity… We need to devote significant time and resources to hold accountable those who are hurting our global community, whether through extraction, pollution or destruction,” she said. “Under-resourced, under-represented and indigenous communities are often disproportionately affected by exploitative extractive industries and climate change. We see this throughout Latin America where environmental human rights defenders have been subject to horrific attacks and worse by corporate actors.”

This mission resonates with program trainees and individuals who often come from underrepresented backgrounds. Graduates of the program have benefited from the hands-on mentoring from faculty and have gone on to launch careers in social justice after making an immediate difference; past investigators, for example, had contributed to public reports on the 2019-20 uprisings in Chile all before receiving a degree.

“Sustainability and the protection of the planet benefit all of us, and so these environmental crimes are happening to our collective detriment regardless of where they are occuring in the world,” Falcón said. “There are multiple ways to contribute to a sustainable planet, and our work is just one method to do so through human rights accountability by collecting and analyzing digital evidence.”