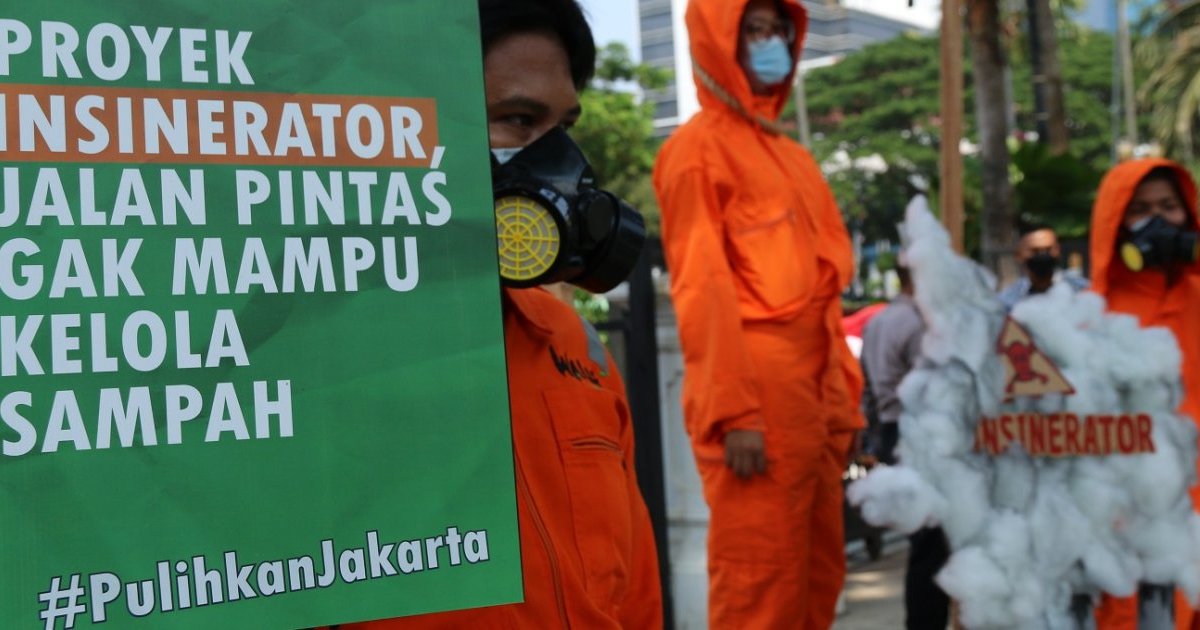 According to Pris Polly Lengkong, chairman of the Indonesian Waste Pickers Union (Ikatan Pemulung Indonesia, or IPI), which aims to provide a voice for the millions of informal workers in the sector, waste pickers have been working hard for little pay to manage the country’s growing waste crisis, separating and creating economic value for recyclable waste.

“Waste pickers are experts,” says Pris. “They have reduced waste by themselves.”

But the Indonesian government isn’t looking to empower waste pickers or expand recycling and reuse systems to solve the country’s waste problem. Instead, it is looking to a technology long used in Europe, Japan, and South Korea: incineration or waste-to-energy. This technology uses high temperatures to burn waste, reducing its mass and producing electricity – and its expansion worries Pris.

“If the government builds a waste-to-energy incinerator, it will be a waste of money. It is better to use the money on helping waste pickers to become more prosperous,” says Pris.

The Indonesian government is pushing for the use of incineration across the country, with President Joko Widodo signing, in 2018, a presidential regulation to accelerate its deployment in 12 major cities across the country. Two are already operating in the Jakarta suburb of Bekasi, and in the country’s second largest city, Surabaya, with several more planned in the capital Jakarta, as well as Bali, Makassar, Surakarta, and Palembang.

Indonesia is not alone. In Thailand, the Philippines and Bangladesh, governments, development funders (including Asia Development Bank, the Japanese International Cooperation Agency, and the Korea Environmental Industry & Technology Institute) and companies are pushing incineration to solve waste management challenges across the region. According to information gathered by Equal Times, at least 30 incinerators are newly opened, under construction, or planned in these three countries alone. But for waste pickers, there are major concerns about the potential loss of livelihoods.

“Even if you have a plan to involve waste pickers, you can only involve a very small percentage of the existing workforce,” says Kabir Arora, a coordinator with the Global Alliance of Waste Pickers, which is supported by Women in Informal Employment: Globalizing and Organizing (WIEGO), a global network focused on empowering the working poor.

Also concerning is the fact that incinerators need high-caloric waste to operate efficiently, which in South-East Asia is mostly plastic – one of the materials that waste pickers can collect for recycling to generate income.

“When you set up incineration plants, you steal the livelihood of waste pickers,” says Arora. “When you start incinerating waste, eventually you need combustible waste and materials like PET bottles, high-density polyethylene (HDPE) and polypropylene. These are very combustible materials and have very high value in the market.”

When WIEGO’s members factored in environmental concerns – incinerators produce high amounts of emissions, including toxic dioxins and bottom ash waste – the alliance came to a clear position shared by all its members, including IPI.

“We are opposed to incineration…it’s not the best way to deal with waste, whether it is plastic waste or any kind of waste,” says Arora.

WIEGO’s members, including IPI, in India and Bangladesh, have worked together to determine a common position and turn that into action. “Waste picker organisations have built a strong coalition to resist incineration plants in different parts of the world,” says Arora.

Japan is one of the major sources of incineration technology. Japanese companies – including Hitachi Zosen, which has three projects in Thailand, JFE Engineering, Marubeni, Mitsubishi, and others – are seeking to export technology to the region, with little space to build more incinerators in Japan itself. The Japanese government has been actively pushing waste-to-energy technology in South-East Asia since the country hosted the G20 summit in 2019.

However, in Japan, home to over 1,000 incinerators, workers play a more active role in the system through recognised labour unions. In Greater Tokyo, 21 incinerators are operating, consuming up to 2.7 million tons of garbage and producing 1304 MW of electricity in 2019. They require constant, 24-hour attention and reliable waste flow to operate efficiently.

Workers in these facilities aren’t informal but, instead, represented by a trade union, the Tokyo Sanitation Workers’ Union, which includes garbage collectors who collect across the metropolis and bring it to incinerators to the highly skilled technical staff operating these facilities.

According to Yoshikatsu Nishimura, an incinerator technician and a member of the Tokyo Sanitation Workers’ Union Executive Committee, trade unions have played a key role in improving safety conditions in incinerators, so much so that since 1976, not a single unionised employee has died due to a work accident.

They have even produced a safety guidebook explaining to workers the risks and how to respond properly – something that management has failed to provide – and push for staff to work on teams so that there is always backup in an emergency.

“If you don’t pay attention to management, they can easily sacrifice safety and prioritise profit, and that could cost workers their lives,” says Nishimura.

There is a big gap between how incinerators operate in developed countries like Japan or Denmark, and Sweden, where waste collectors are often full-time staff, represented by labour unions, and receive health benefits, and in developing countries like Indonesia, Thailand, and the Philippines, with so many informal sector workers and so few public sector unions. That, along with vastly different waste streams, and concerns about pollution control, led Arora to a clear conclusion.

“These technologies are not relevant to us,” says Arora. “Sitting in the Global South, it doesn’t make sense to me to burn and incinerate waste.”

Similarly, in Indonesia, it’s unlikely that workers collecting waste, or running the incinerators, will be unionised like in Japan. When the government was planning to build the incinerator in Bekasi, waste pickers weren’t even invited to discuss plans with the government.

“Maybe they were scared, if we were invited, that maybe we would protest,” says Pris, adding that they would only have protested about their lack of participation.

Because of that and more, IPI opposes all incineration in Indonesia. “In our opinion, incinerators are squandering money. Incineration can kill the welfare of waste pickers because they can no longer work to find recycled waste like plastic.”