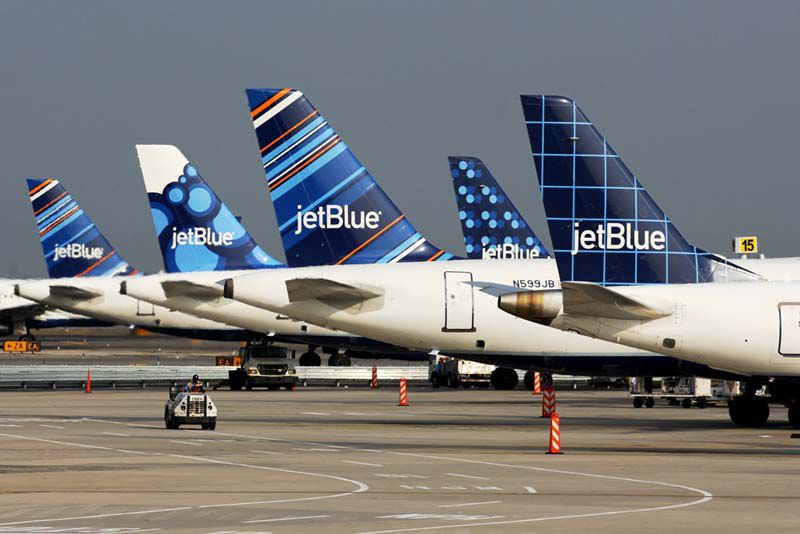 JetBlue has announced sustainability targets approved by the Science Based Targets initiative (SBTi). With this target, JetBlue commits to reducing well-to-wake (lifecycle) scope 1 and 3 greenhouse gas (GHG) emissions related to jet fuel by 50% per revenue tonne kilometer (RTK) by 2035 from a 2019 base year. JetBlue’s most aggressive near-term emissions reduction target to date, this science-based target aligns with the goals of the Paris Agreement and the airline’s own goal to reach net zero carbon emissions by 2040 – 10 years ahead of broader airline industry targets. Aligned with SBTi requirements, JetBlue will regularly review and update this target following any significant change to its business or structure.

The airline will increase its investments in lower-carbon solutions to meet this aggressive near-term target. And will evaluate future sustainability investments with its science-based targets in mind. JetBlue says it encourages and supports efforts by aircraft and engine manufacturers, governments, regulatory agencies, and fuel suppliers to realize their own GHG emission reduction goals.

Charting a path to net zero

The airline further illustrates its path to achieving its 2035 and net zero goals and contributing factors with its JetBlue Projected Emissions Reduction Pathway (graphic here). Sustainable aviation fuel (SAF) is expected to be the key contributor to large-scale lifecycle emissions reduction, highly dependent on availability and supply costs. Advancements in aircraft technology and fuel efficiency represent the second most significant opportunity for emissions reduction. This includes efficiencies from the airline’s transition to newer and more advanced aircraft, the incremental improvements for aircraft delivered in subsequent years, and the potential for broader efficiency improvements for next-generation aircraft yet to be developed but anticipated to be commercially available by the late 2030s or early 2040s.

JetBlue operates a fuel savings strategy that starts with a young, fuel-efficient fleet that reduces emissions from fuel burn from the outset. Its growing fleet of Airbus A321neo aircraft are improving fuel economy by approximately 20%. Further, JetBlue continues to take delivery of Airbus A220s, reducing emissions by up to 35% per seat compared to the aircraft they are replacing.

JetBlue is accelerating the retirement of its E190 fleet to support fuel efficiency and cost goals, with the final E190 aircraft scheduled to exit the fleet in 2025. And to ensure all aircraft are flown efficiently, JetBlue also operates a cross-functional Fuel Optimization Team targeting a range of procedural and technology shifts that maximize the efficiency of its flight operations. The airline is on pace to achieve a 6% improvement in emissions per available seat mile (ASM) in 2022 versus 2019 flying.

Further emissions reductions can be achieved by looking at operational airspace, and JetBlue continues to advocate for air traffic control modernization (NextGen) efforts. Current Air Traffic Control inefficiencies account for as much as 12% of fuel burn and resulting emissions. According to JetBlue, one of the most impactful ways to help reduce airline emissions across the industry is transitioning the United States’ ageing radar technology with GPS-based technology, which would allow for greater efficiency, more consistent flight planning, and as an added benefit, improved on-time performance for all travelers.

JetBlue views SAF as the most promising avenue for addressing aviation emissions in a meaningful and rapid way – once cost-effective SAF is made available commercially at scale. SAF can be produced from a wide array of renewable sources such as agricultural wastes and used cooking oils—not fossil fuels—and can lower lifecycle greenhouse gas emissions by roughly 80% compared to traditional petroleum-based fuels.

Since 2020, JetBlue has been flying regularly using SAF from its California airports in Los Angeles and San Francisco, partnering with both currently available SAF suppliers in the U.S. Through these existing and future SAF offtake agreements, JetBlue seeks to build a diversified portfolio of future SAF suppliers and feedstocks while continuing to send the message that strong demand for SAF exists.

Advancing the Future of Flight

The airline’s subsidiary, JetBlue Ventures (JBV), continues to invest in and partner with startups improving travel and hospitality, including those in the sustainable travel space. JBV has invested in seven direct and three adjacent sustainability companies to date. The team explores advanced methods of measuring and reducing emissions, technologies that improve environmental protections and encourage sustainable tourism, and transportation powered by alternative propulsion systems like electric or hydrogen-powered commercial aircraft.

Since first setting the airline’s path to net zero, JetBlue has maintained that carbon offsetting is a bridge solution toward greater sustainability efforts that directly reduce air travel emissions. JetBlue is proud to have voluntarily offset more than 11M metric tons of CO2 emissions to date (EOY 2022), including providing domestic and transatlantic carbon-neutral flights for all customers from June 2020 to 2022. As lower-carbon solutions within the airline’s operations are made more readily available, the use of carbon offsets was always intended to decrease.

JetBlue will continue to collaborate with other like-minded organizations and recently joined the Business Alliance to Scale Climate Solutions (BASCS) as the first airline member to open opportunities for investment, policy influence, and discussions with other corporations and NGOS/IGOS in aligned messaging around scaling climate solutions. With the BASCS partnership, JetBlue will specifically focus on workstreams seeking to encourage conservation and restoration projects for coastal and oceanic carbon ecosystems – referred to as blue carbon projects – as well as promote learning sessions offering transparency into the standards, methodologies, and corporate guidance initiatives that go into these carbon credit markets.