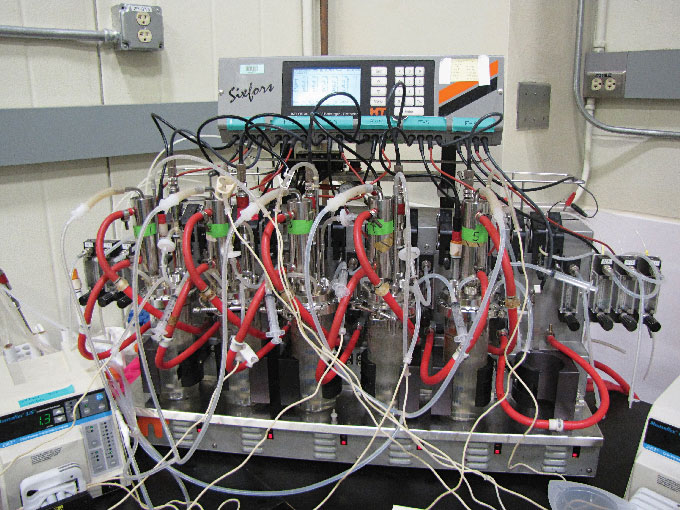 Our modern lives depend on rare earth elements, and we may soon not have enough to meet growing demand.

Because of their special properties, these 17 metallic elements are crucial ingredients in computer screens, cell phones and other electronics, compact fluorescent lamps, medical imaging machines, lasers, fiber optics, pigments, polishing powders, industrial catalysts – the list goes on and on (SN Online: 1/16/23). Notably, rare earth is an essential part of the high-powered magnets and rechargeable batteries in electric vehicles and renewable energy technologies needed to get the world to a low- or zero-carbon future.

Science News headlines in your inbox

Headlines and summaries of the latest Science News articles are delivered to your email every Thursday.

Thank you for signing up!

There was a problem signing you up.

Satisfying that appetite won’t be easy. Rare earth elements are not found in concentrated deposits. Miners must excavate huge amounts of ore and subject it to physical and chemical processes to concentrate the rare earth and separate them. The transformation is energy-intensive and dirty, requiring toxic chemicals and often generating a small amount of radioactive waste that must be safely disposed of. Another concern is access: China has a near monopoly on mining and processing; the United States has just one active mine.

For most of the jobs rare earth do, there are no good substitutes. So to help meet future demand and diversify who controls the supply — and perhaps even make rare earth recovery “greener” — researchers are looking for alternatives to conventional mining.

Proposals include everything from extracting the metals from coal waste to really out-there ideas like mining the moon. But the approach most likely to make an immediate dent is recycling. “Recycling is going to play a very important and central role,” says Ikenna Nlebedim, a materials scientist at Ames National Laboratory in Iowa and the Department of Energy’s Critical Materials Institute. “That’s not to say we’re going to recycle our way out of the critical materials challenge.”

Still, in the rare earth magnets market, for instance, by about 10 years from now, recycling could satisfy as much as a quarter of the demand for rare earth, based on some estimates. “That’s huge,” he says.

But before the rare earth in an old laptop can be recycled as regularly as the aluminium in an empty soda can, there are technological, economic and logistical obstacles to overcome.

Why is rare earth so challenging to extract?

Recycling seems like an obvious way to get rare earth. It’s standard practice in the United States and Europe to recycle from 15 to 70 percent of other metals, such as iron, copper, aluminium, nickel and tin. Yet today, only about 1 percent of rare earth elements in old products are recycled, says Simon Jowitt, an economic geologist at the University of Nevada, Las Vegas.

Rare earth are often blended with other metals in touch screens and similar products, making removal difficult. In some ways, recycling rare earth from tossed-out items resembles the challenge of extracting them from ore and separating them from each other. Traditional rare earth recycling methods also require hazardous chemicals such as hydrochloric acid, a lot of heat, and thus a lot of energy. On top of the environmental footprint, the recovery cost may not be worth the effort, given the small yield of rare earth. A hard disk drive, for instance, might contain just a few grams; some products offer milligrams.

Chemists and materials scientists, though, are trying to develop smarter recycling approaches. Their techniques put microbes to work, ditch the acids of traditional methods or attempt to bypass extraction and separation.

One approach leans on microscopic partners. Gluconobacter bacteria naturally produce organic acids that can pull rare earths, such as lanthanum and cerium, from spent catalysts used in petroleum refining or from fluorescent phosphors used in lighting. The bacterial acids are less environmentally harmful than hydrochloric acid or other traditional metal-leaching acids, says Yoshiko Fujita, a biogeochemist at Idaho National Laboratory in Idaho Falls. Fujita leads research into reuse and recycling at the Critical Materials Institute. “They can also be degraded naturally,” she says.

In experiments, the bacterial acids can recover only about a quarter to half of the rare earth from spent catalysts and phosphors. Hydrochloric acid can do much better — sometimes extracting as much as 99 percent. But bio-based leaching might still be profitable, Fujita and colleagues reported in 2019 in ACS Sustainable Chemistry & Engineering.

In a hypothetical plant recycling 19,000 metric tons of used catalysts a year, the team estimated annual revenues to be roughly $1.75 million. But feeding the bacteria that produce the acid on-site is a big expense. In a scenario where the bacteria are fed refined sugar, the total costs for producing the rare earth are roughly $1.6 million yearly, leaving around just $150,000 in profits. Switching from sugar to corn stalks, husks, and other harvest leftovers would slash costs by about $500,000, raising profits to about $650,000.

Other microbes can also help extract rare earths and take them even further. A few years ago, researchers discovered that some bacteria that metabolize rare earths produce a protein that preferentially grabs onto these metals. This protein, lanmodulin, can separate rare earths from each other, such as neodymium from dysprosium — two components of rare earth magnets. A lanmodulin-based system might eliminate the need for the many chemical solvents typically used in such separation. And the waste left behind — the protein — would be biodegradable. But whether the system will pan out on a commercial scale is unknown.

How to pull rare earths from discarded magnets

Another approach already being commercialized skips the acids and uses copper salts to pull the rare earths from discarded magnets, a valuable target. Neodymium-iron-boron magnets are about 30 percent rare earth by weight and the single largest application of the metals in the world. One projection suggests that recovering the neodymium in magnets from U.S. hard disk drives alone could meet up about 5 percent of the world’s demand outside China before the decade's end.

Nlebedim led a team that developed a technique that uses copper salts to leach rare earths out of shredded electronic waste that contains magnets. Dunking the e-waste in a copper salt solution at room temperature dissolves the rare earths in the magnets. Other can be scooped out for their recycling, and the copper can be reused to make more salt solution. Next, the rare earths are solidified and, with the help of additional chemicals and heating, transformed into powdered minerals called rare earth oxides. The process, which has also been used on material left over from magnet manufacturing that typically goes to waste, can recover 90 to 98 percent of the rare earths. The material is pure enough to make new magnets, Nlebedim’s team has demonstrated.

In a best-case scenario, using this method to recycle 100 tons of leftover magnet material might produce 32 tons of rare earth oxides and net more than $1 million in profits, an economic analysis of the method suggests.

That study also evaluated the approach’s environmental impacts. Compared with producing one kilogram of rare earth oxide via one of the main types of mining and processing currently used in China, the copper salt method has less than half the carbon footprint. It produces an average of about 50 kilograms of carbon dioxide equivalent per kilogram of rare earth oxide versus 110, Nlebedim’s team reported in 2021 in ACS Sustainable Chemistry & Engineering.

But it’s not necessarily greener than all forms of mining. One sticking point is that the process requires toxic ammonium hydroxide and roasting, which consumes a lot of energy, and it still releases some carbon dioxide. Nlebedim’s group is now tweaking the technique. “We want to decarbonize the process and make it safer,” he says.

Meanwhile, the technology seems promising enough that TdVib, an Iowa company that designs and manufactures magnetic materials and products, has licensed it and built a pilot plant. The initial aim is to produce two tons of rare earth oxides per month, says Daniel Bina, TdVib’s president and CEO. The plant will recycle rare earth from old hard disk drives from data centers.

After demagnetizing and cleaning discarded magnets, Noveon directly mills them into a powder before building them back up as new magnets. Unlike other recycling methods, there’s no need to extract and separate the rare earth first. The final product can be more than 99 percent recycled magnet, Dunn says, with a small addition of virgin rare earth elements — the “secret sauce,” as he puts it — that allows the company to fine-tune the magnets’ attributes.

Compared with traditional magnet mining and manufacturing, Noveon’s method cuts energy use by about 90 percent. Miha Zakotnik, Noveon’s chief technology officer and other researchers reported in 2016 in Environmental Technology & Innovation. Another 2016 analysis estimated that for every kilogram of magnet produced via Noveon’s method, about 12 kilograms of carbon dioxide equivalent are emitted. That’s about half as much of greenhouse gas as conventional magnets.

Dunn declined to share what volume of magnets Noveon currently produces or how much its magnets cost. But the magnets are being used in some industrial applications, for pumps, fans and compressors, consumer power tools and other electronics.

Even as researchers clear technological hurdles, there are still logistical barriers to recycling. “We don’t have the systems for collecting end-of-life products with rare earth in them,” Fujita says, “and there’s the cost of dismantling those products.” For a lot of e-waste, before rare earth recycling can begin, you must get to the bits containing those precious metals.

Noveon has a semiautomated process for removing magnets from hard disk drives and other electronics.

Apple is also trying to automate the recycling process. The company’s Daisy robot can dismantle iPhones. And in 2022, Apple announced a pair of robots called Taz and Dave that facilitate recycling rare earth. Taz can gather magnet-containing modules typically lost during the shredding of electronics. Dave can recover magnets from taptic engines, Apple’s technology for providing users with tactile feedback when tapping an iPhone screen.

Even with robotic aids, it would still be a lot easier if companies just designed products to make recycling easy, Fujita says.

No matter how good recycling gets, Jowitt sees no getting around the need to ramp up mining to feed our rare earth–hungry society. But he agrees recycling is necessary. “We’re dealing with intrinsically finite resources,” he says. “Better we try to extract what we can rather than just dump it in the landfill.”